Northeast Leads the Charge to Electrify the Built Environment

Buildings are the second-largest source of greenhouse gas emissions in the U.S. Northeast, trailing only transportation. In dense metropolitan areas, buildings are responsible for as much as two-thirds of all emissions, as is the case in New York City. These emissions stem largely from the region’s reliance on natural gas and fuel oil for space and water heating. While all parts of the United States remain reliant on natural gas, the Northeast is the only U.S. region still heavily utilizing fuel oil. In fact, 85 percent of all fuel oil delivered within the United States in 2020 was in the Northeast (Figure 1). Likewise, in 2015, only 13 percent of all households in the Northeast reported electricity as their primary space heating fuel, the lowest of any U.S. Census Region and 22 percentage points below the national average. And among that 13 percent, less than half of households had modern electric heat pumps (Figure 2). Closing this beneficial electrification gap will be difficult, but many state and local governments across the region, from New York to Maine, are rising to the challenge. In the past few years, legislatures, city councils, and public agencies have enacted numerous decarbonization policies and established a variety of funding programs with the potential to propel the region towards widespread electrification. 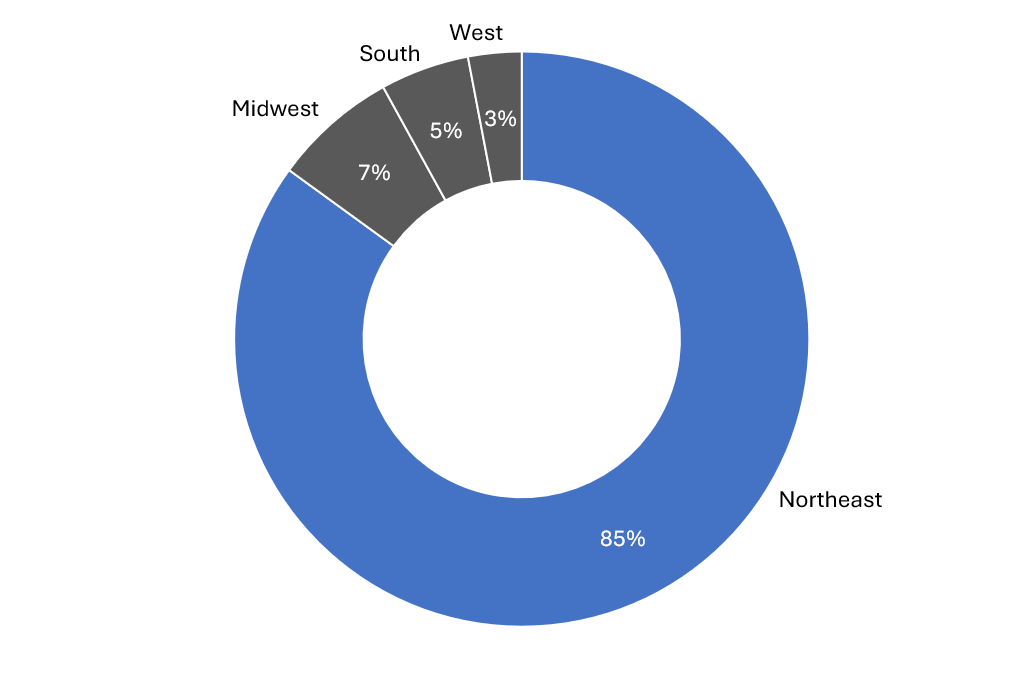 Figure 2: Distribution of Electric Space Heating Equipment in the Northeast (2015) 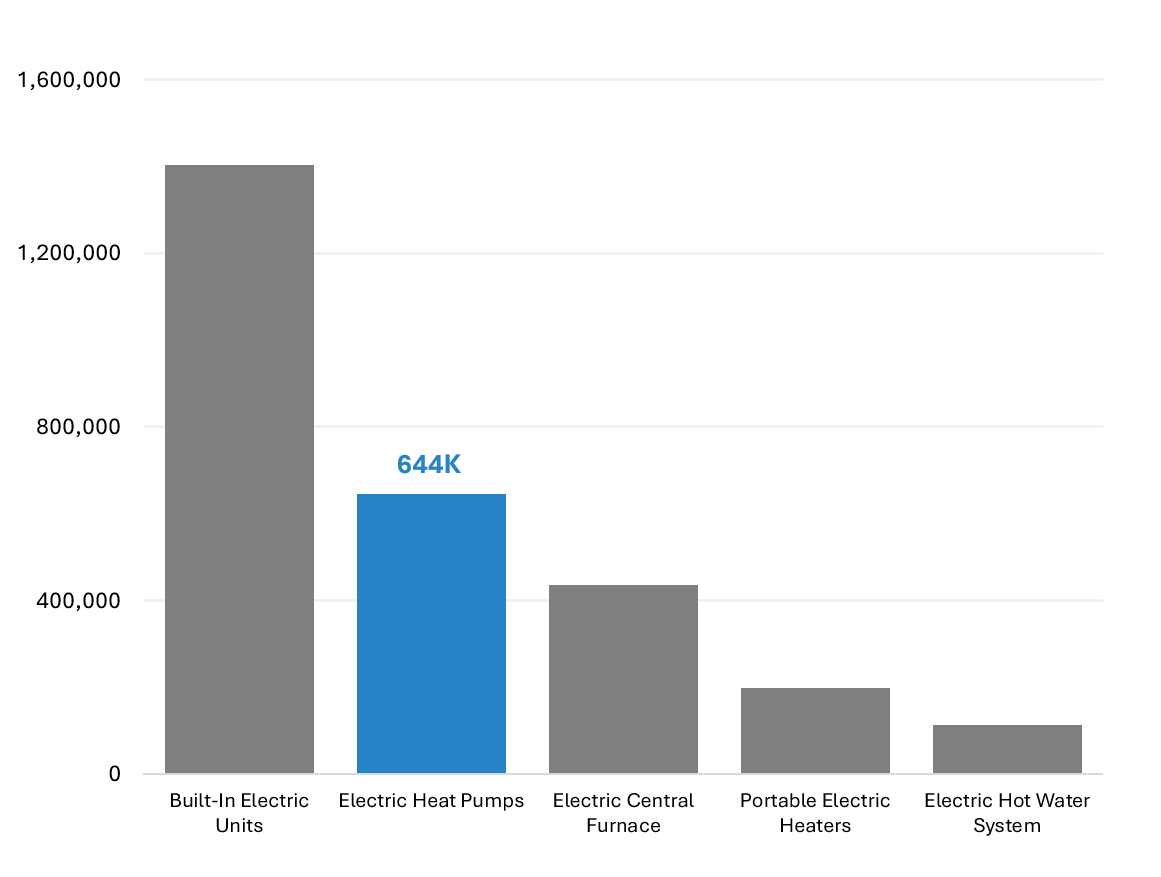 Source: Atlas Buildings Hub. In 2015, less than half of Northeast households with primary electric heating had modern electric heat pumps.

Let us begin with the most populous state in the Northeast: New York, home to more than 6.2 million residential and commercial buildings. Over the last several years, New York state has led by example through a combination of rebate programs and beneficial electrification policies. Among these major initiatives is the New York State Energy Research and Development Authority (NYSERDA)’s Clean Heat Program, through which the state is expected to invest $230 million in market development for electrification technologies. This funding supplements the $250 million already awarded or made available through existing state programs. NYSERDA has also partnered with six of the state’s investor-owned utilities, which were collectively approved to invest over $450 million in heat pump incentives across their service territories. For example, Con Edison, which serves New York City and surrounding areas, is offering up to $24,000 for the purchase and installation of a five-ton geothermal heat pump system (48,000 British thermal units). New York also now offers a 25 percent state tax credit for geothermal heat pump installations, providing up to an additional $5,000 to offset the cost of the relatively expensive subsurface systems. State and utility offerings, combined with the 26 percent federal tax credit, could cover over half of a $60,000 five-ton system in ConEd territory.

Across New York, cities such as Ithaca and New York City have made their own impressive commitments. Last November, New York City became the nation’s largest municipality to enact a gas hookup ban for new construction, which will take effect in 2023. The moratorium phases out fossil fuels in new buildings and represents a monumental shift towards building electrification for millions of people.

While requirements for new construction mitigate emissions in the future building stock, nearly 60 percent of Northeast residential housing units were constructed prior to 1970 (Figure 3). Therefore, it is equally, if not more, important to retrofit existing buildings, in addition to greening new construction. In taking on that challenge, last winter the city of Ithaca, NY voted to fully decarbonize its entire building stock by 2030—the first municipality in the United States to formally commit to doing so. Ithaca’s electrification plan is part of its broader Green New Deal to reach carbon neutrality by the end of the decade. 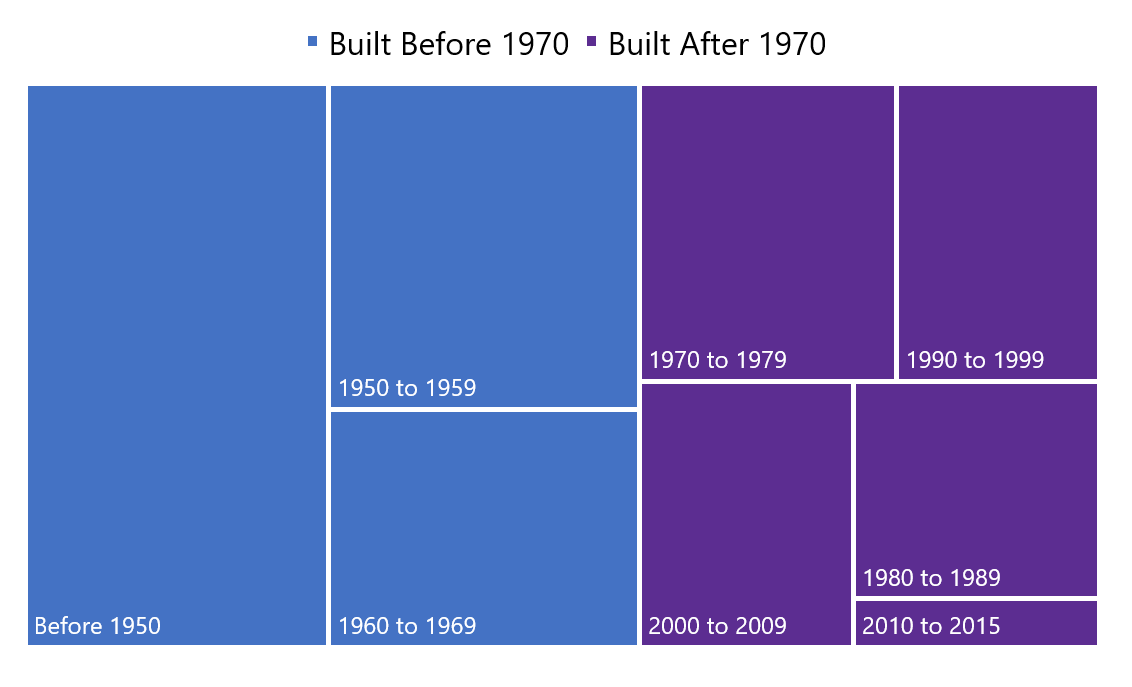 New York is not the only state in the region incentivizing electrification. Last March, Massachusetts Governor Charlie Baker signed into law a climate policy roadmap for the Bay State. The statute sets ambitious emissions limits, including a 50 percent reduction by 2030 from the 1990 baseline, and a further 25 percent reduction by 2040. As 29 percent of Massachusetts’ emissions come from fossil fuel combustion in buildings, a significant portion of anticipated reductions will need to stem from electrification of the built environment. With a history of funding programs—such as the Massachusetts Clean Energy Center’s Clean Heating and Cooling program that provided $48 million for electrification rebates—the state is on its way to meeting these goals. MassSave, a collaborative comprised of investor-owned utilities, established building electrification and heat pump deployment as key priorities in its recently approved $3 billion 2022-2024 energy efficiency plan, adding invaluable private sector support to public efforts.

Boston, like New York City, is going above and beyond statewide goals. This past October, then Boston Mayor Kim Janey signed the Building Emissions Reduction and Disclosure Ordinance (BERDO), which sets emissions targets as well as reporting requirements for buildings larger than 20,000 square feet. While only four percent of buildings are covered under this ordinance, that four percent accounts for sixty percent of the city’s building sector emissions.

In upper New England, municipalities are also making decarbonization commitments alongside their state governments. In Maine, the city of Portland is providing a bevy of clean heating incentives as part of its Electrify Everything program, offering residents up to $500 off air source heat pumps, heat pump water heaters, and home solar, all of which can be stacked with state incentives provided by Efficiency Maine. And in Vermont, the city of Burlington set one of the most aggressive climate goals in the country in 2019 – to become a Net-Zero Energy city by 2030. The city is already ahead of the pace to meet this end-of-decade goal according to the 2021 Net Zero Energy Roadmap Update, and the projections look even better with the recent enactment of a law enabling Burlington to charge a carbon fee on buildings heated with fossil fuels.

While these Northeastern states and cities show what is possible under leadership favorable to building electrification, numerous hurdles remain. Chief among them are preemption laws: state-level requirements that prohibit local municipalities from passing gas hookup moratoria. These laws were galvanized by the city of Berkeley, California’s vote to ban natural gas hookups in new construction in 2019. Following Berkeley’s ordinance, state legislatures across the country moved to prevent similar measures from taking place. Twenty states have since passed preemption laws including New Hampshire.

Even in states with favorable politics for climate action, decarbonization policies have no guarantee of enactment. For instance, New York Governor Kathy Hochul proposed a law requiring new homes to be all-electric starting in 2027. The proposal was intended to be included in the state’s FY23 budget but was cut from the final release.

Both headwinds and tailwinds exist for building decarbonization, but policymakers in the Northeast are poised to lead the charge. The region is on a clear path to electrify thousands of buildings in the coming decade and will serve as an example for the nation to follow.