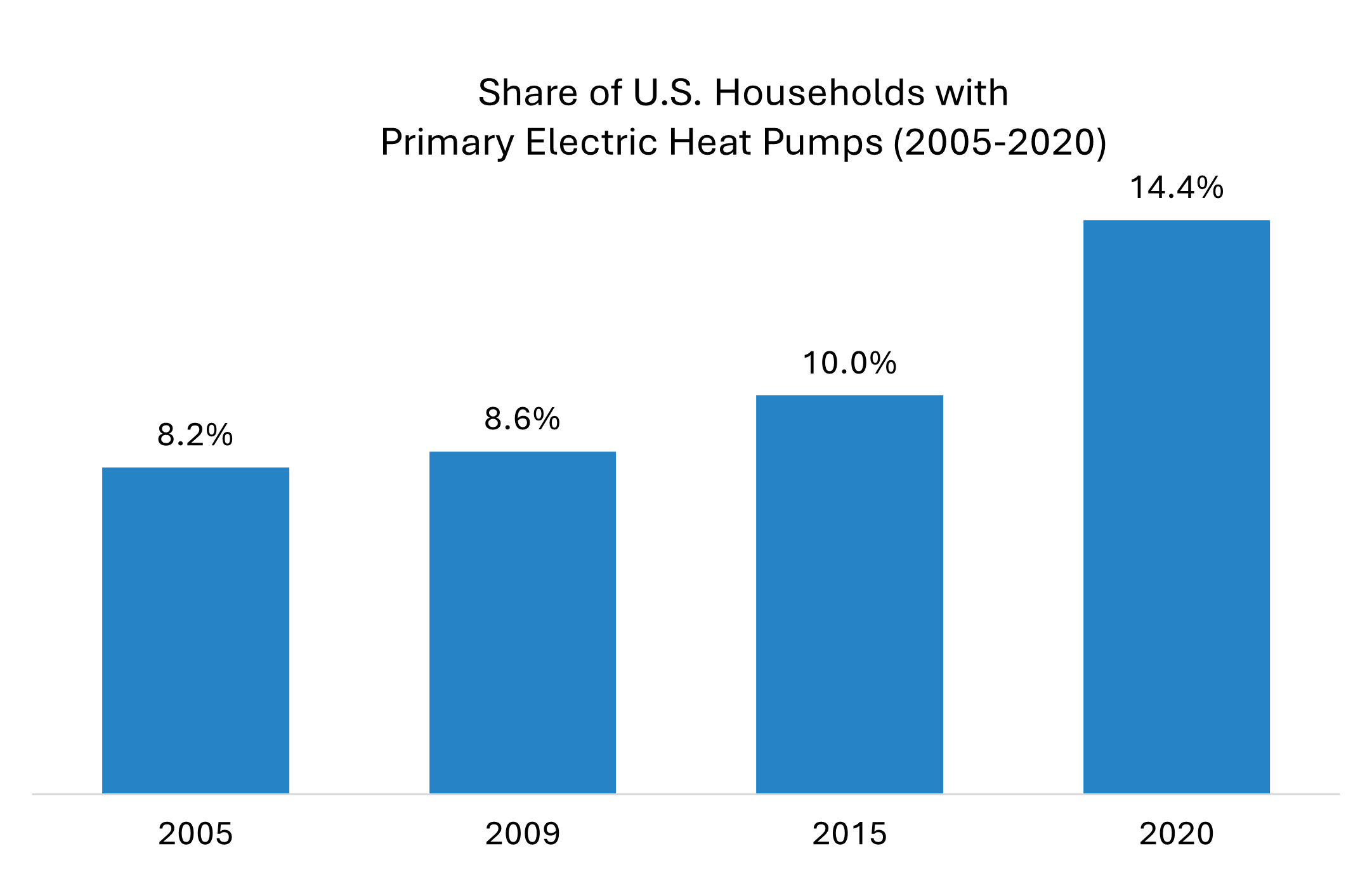 As the largest single supplier of piped gas and petroleum to the European market, Russia has long brandished its energy resources as geopolitical leverage against its Western neighbors. In fact, nearly 40 percent of natural gas imports from outside the EU in 2021 came from Russia, with the United States making up just seven percent of the import share. And beyond the European market, Russia is one of the world’s top three crude producers and the largest exporter of natural gas (at least prior to the current war). Russia’s invasion of Ukraine has thrust Europe’s dependence on Russian fossil fuels, piped gas in particular, to center stage as the conflict has upended global energy markets amid pipeline cancellations, market volatility, sanctions, inflation, and supply disruptions. In response, this spring the EU unveiled a plan to completely eliminate Russian fossil fuels from the bloc’s energy imports by 2030.

U.S. experts and decisionmakers, in taking stock of the war’s consequences that range from skyrocketing domestic energy prices to growing European security concerns, have looked to differing policy approaches. To help wean Europe from Russian gas, some wish to expand domestic fossil fuel production and export more liquefied natural gas (LNG) to the continent. However, that could lock in decades of fossil fuel investment and emissions at a time when pipelines could become stranded assets and the global carbon budget is running dry.

At the same time, the U.S. federal government invoked the Defense Production Act this June to rapidly scale the manufacture of heat pumps and insulation in the United States. And while some have suggested the U.S. export those products to Europe to facilitate the continent’s push toward electrification, the government may also consider an initiative to decarbonize the U.S. buildings sector and reduce economy-wide natural gas demand. If the Biden-Harris Administration leans towards the latter, the associated gas savings could be exported to Europe as LNG while mitigating the need for additional domestic fossil fuel production or natural gas infrastructure. Ultimately, this approach should be treated as a short-term solution to a long-term problem, with the end goal being full-scale electrification, or at the very least carbon-neutrality, on both sides of the Atlantic.

As seen on Buildings Hub media pulse, stakeholders across the U.S. government, particularly in the GOP, have called for increasing U.S. natural gas production and LNG exports to Europe in order to reduce the continent’s dependence on Russian energy. The Biden-Harris Administration concurred, and in collaboration with the European Commission, committed to exporting an additional 15 billion cubic meters of gas to the European Union in 2022. Increasing LNG exports would require building more export terminals, constructing additional liquefication/gasification infrastructure, and investing in long-term fossil assets that incentivize continued gas extraction.

Encouraging increased natural gas production will drive additional investment in fossil fuel extraction, distribution, and transit, and these investors will continue to demand a return, further entrenching their interests in the country’s economic and political landscape. And while many states and the U.S. federal government have begun to chart a carbon-neutral future, any plan incentivizing additional gas production will undoubtedly be counterproductive to climate goals, locking in decades of unmitigated emissions that will continue to eat away at the dwindling carbon budget. At the same time, LNG is a globally traded commodity often sold to the highest bidder on the spot market, which can make it difficult to ensure gas will be delivered to European buyers once it sets sail from the Gulf Coast.

This June, the Biden-Harris Administration invoked the Defense Production Act to rapidly scale the manufacture of heat pumps and insulation materials. Environmental policy leaders, including Bill McKibben, suggest the United States take this opportunity to expand the production and sale of electric heat pumps to Europe in order to reduce the continent’s dependence on Russian natural gas. This approach is an important and reasonable consideration, but it may face cerain obstacles in implementation.

First, exporting American heat pumps to Europe does not align with market needs; the vast majority of European heat pumps are ductless minisplits, whereas the United States primarily deploys central ducted systems, with minisplits making up just six percent of the total U.S. heat pump landscape in 2020 (Figure 1). Furthermore, data from Buildings Hub and the Energy Information Administration (EIA) demonstrate that only 10 percent of U.S. housing units used electric heat pumps for primary space heating in 2015, with the total share rising to just 14.5 percent of households in 2020 (Figure 2). New York, with perhaps the country’s most ambitious goal to achieve two million electric-ready homes by 2030, had just 240,000 electric heat pumps deployed statewide in 2020 (Figure 3). Based on the data and the current HVAC landscape, producing heat pumps and insulation for export to Europe may not be in the national interest given the scale of the challenge before us, and the current divide between goal and reality. 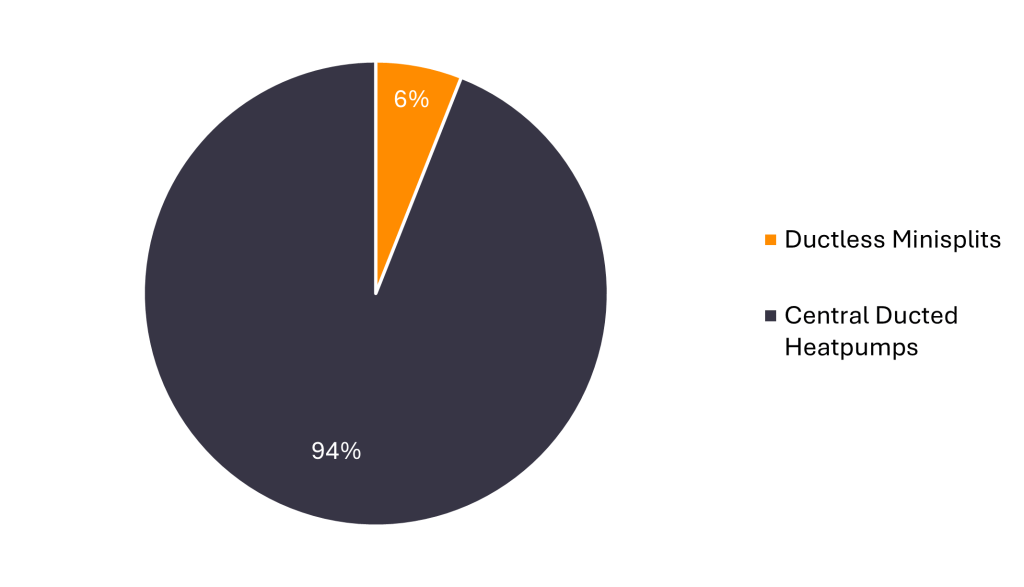 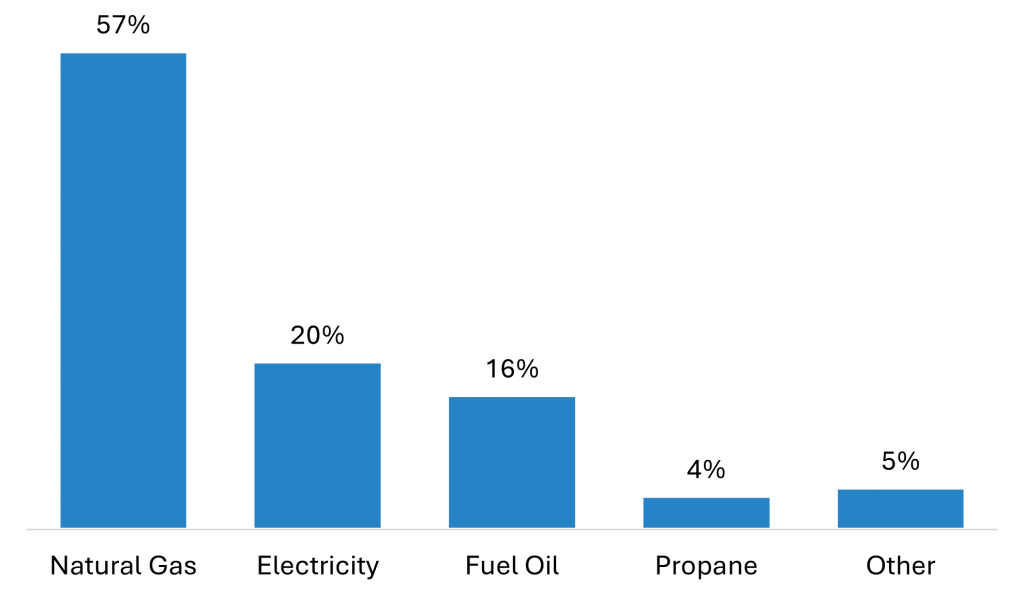 As an alternate option, the United States could work to reduce natural gas demand across the economy, in the buildings sector and beyond, through robust and ambitious electrification and energy efficiency initiatives. In the short term, those gas savings could be exported to the EU as LNG while mitigating the need to drill for additional fossil fuel resources.

The residential and commercial building sectors accounted for over a quarter of U.S. natural gas consumption in 2021. Should the country meaningfully accelerate domestic building electrification and amplify its weatherization efforts, overall natural gas demand and consumption would drop, notwithstanding the expected increase in load across the two sectors. As mentioned above, only 14.5 percent of U.S. households are equipped with primary electric heat pumps, and the market is ripe with opportunity to grow and expand. Likewise, only 500,000 households were weatherized through the Weatherization Assistance Program between 2016 and 2020 according to data provided by the National Association of State Community Service Programs, while nearly 40 million U.S. households qualify for interventions. The additional insulating material produced through the Defense Production Act could be deployed to weatherize the millions of buildings currently in need of energy efficiency retrofits. As a short-term solution to a long-term problem, the associated gas savings resulting from these domestic decarbonization efforts could be redirected to Europe as LNG exports while mitigating the need to expand gas production to help meet European demand for alternative sources.

While full-scale electrification would increase building sector power load, electric heat pumps are 200-300 percent more efficient than the standard gas-powered furnace, meaning they require far less input to produce the equivalent thermal output. It is likely that in the short term natural gas may take on a greater role in providing firm electricity to power these green buildings, but more zero-carbon electrons are added to the grid every year, with clean energy additions far outpacing new natural gas. Carbon-free sources have made up over 65 percent of planned electric generation capacity additions in the U.S. for the past several years, with that share rising to a whopping 84 percent in 2021 (Figure 3). Notwithstanding any increase in load, a better-insulated, more weatherized building stock would require less energy regardless. And these market developments are buoyed by strong political will, with the Biden-Harris Administration committing to full U.S. power sector decarbonization by 2035.

Energy geopolitics is messy. Russia’s stranglehold on European energy markets will remain a challenge going forward, and the United States, as a leading energy producer and clean energy champion, has a significant role to play in helping Europe diversify and electrify its energy resources. Expanding U.S. fossil energy production in order to ramp up LNG exports may create negative incentives and undermine national and global climate goals. The recent invocation of the Defense Production Act provides the United States with a unique and unprecedented opportunity to rapidly expand production of equipment and materials necessary to electrify the buildings sector. Whether to deploy those goods domestically or for export to Europe is a question for the U.S. federal government to grapple with, and both strategies come with their relative merits and shortcomings. Regardless of the approach taken, one thing should be clear: decarbonization and global energy security need not be opposed, and with the right policy savvy, they can work in tandem.

About the author: Zachary Strauss