Gas Reigns, Electricity Lags: A Brief History of Home Heating in the Northeast 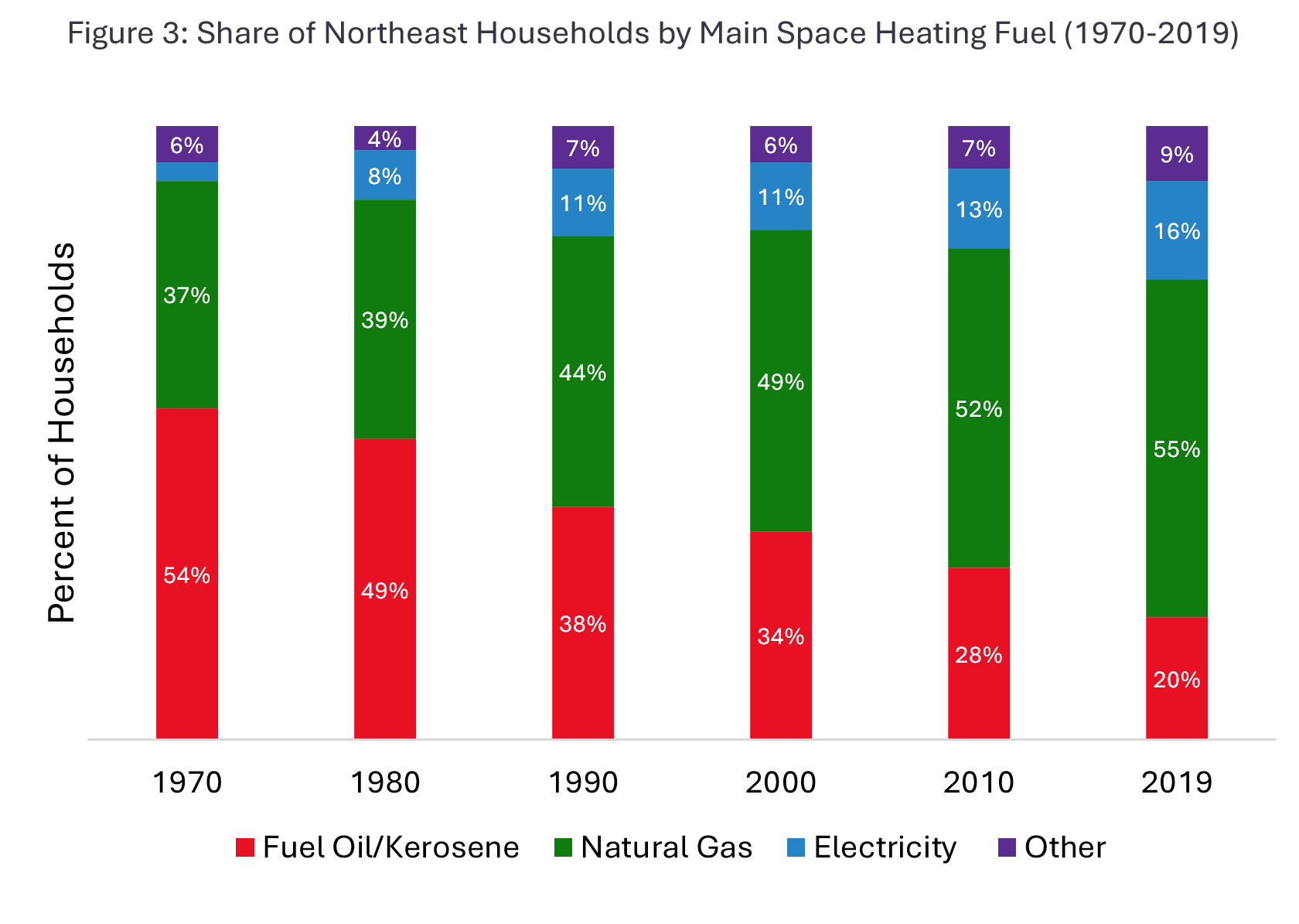 As seen on Buildings Hub, fuel combustion in residential and commercial buildings for heating, cooling, and cooking generated 13 percent of total U.S. greenhouse gas emissions in 2019. Every region in the United States finds itself in a different position with regard to residential building electrification, particularly as it pertains to space heating. The Northeast is the census region with the lowest share of residential buildings using electricity as a primary heating fuel: just 13 percent of residential households in the region reported electricity as their primary space heating fuel in 2015, far below the national average of 35 percent, and 43 percentage points behind the South (Figure 1). Likewise, utility gas dominates the Northeast home heating mix and regional fuel oil use persists despite its near obsolescence across the rest of the country. How has the Northeast home heating mix changed over the past 50 years?

In 1970, 54 percent of Northeast households used fuel oil or kerosene as their primary space heating source, two times the U.S. average, while 37 percent and three percent relied on utility gas and electricity, respectively. As a result of the 1973 OPEC oil embargo, U.S. crude prices increased by over 200 percent in real terms between 1970 and 1975. The cost of crude is a major component of the price of residential fuel oil, and the latter rose in step with the former.

To lower heating costs, Northeast households in the mid-1970s looked for alternatives to fuel oil. Many took a chance on electric heating. By 1980, the share of households relying on electricity as their main space heating fuel had nearly tripled from a decade earlier, reaching eight percent. This change represents the largest single-decade increase in the share of electric heating in the Northeast residential heating fuel mix. As calculated from Buildings Hub data, 36 percent of all Northeast residential buildings with primary electric heating systems constructed through 2015 were built in the 1970s (Figure 2). At the same time, the share of Northeast households reporting fuel oil or kerosene as their main space heating fuel fell from 54 to 49 percent between 1970 and 1980, initiating a continuous shift away from petroleum-based residential heating. 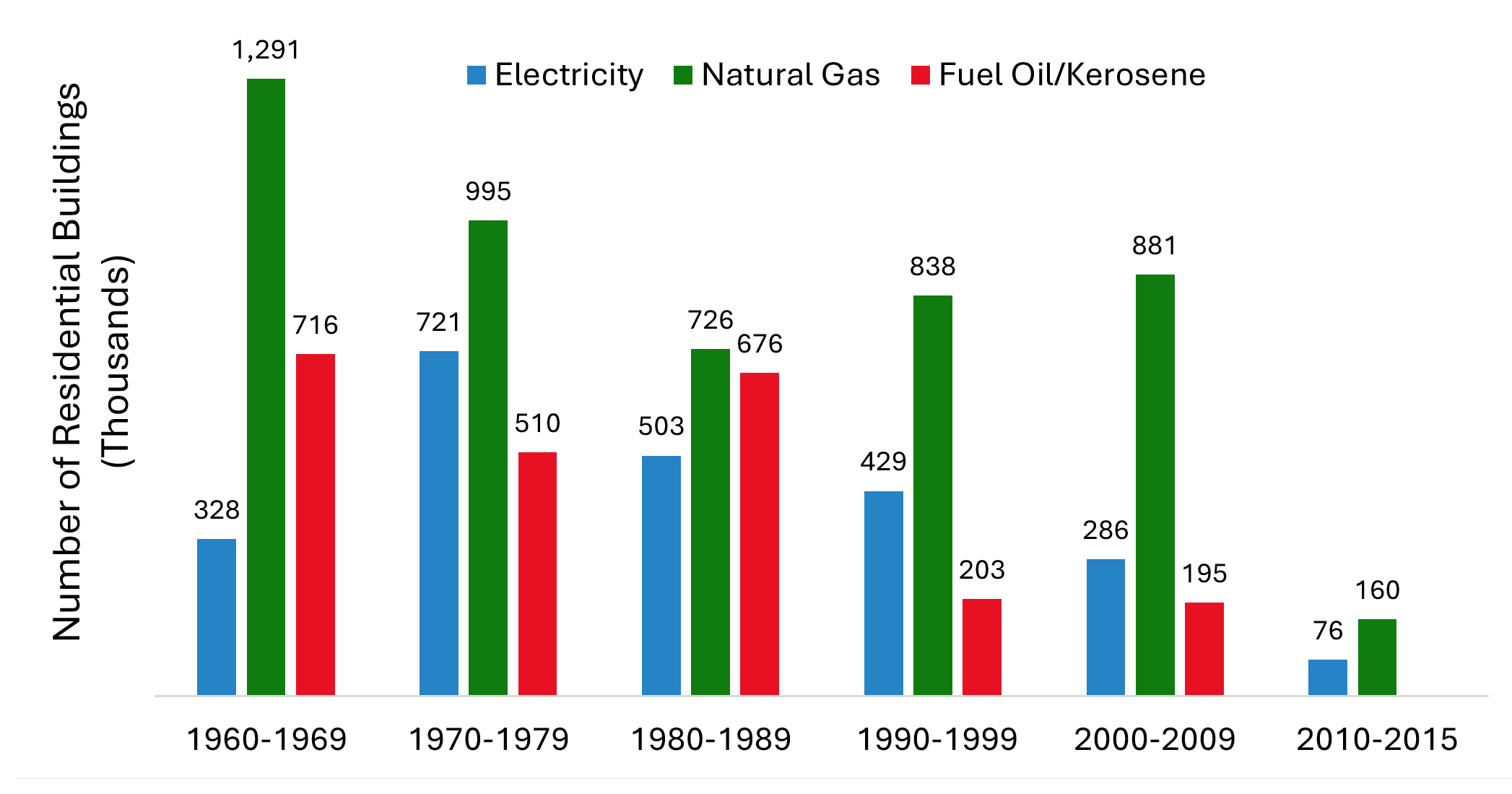 While the 1970s witnessed a surge in electric heating adoption in the Northeast, this trend did not continue. In the 1970s and 80s, most Northeast residential buildings constructed with primary electric heating were outfitted with costly, inefficient electric resistance heating systems (this was before the advent of high-efficiency, cold-climate air source heat pumps). In the Northeast, with long, cold winters, and older, poorly insulated homes, baseboard electric resistance heating struggled to compete with utility gas. Similarly, gas proved more cost effective than fuel oil and would continue to chip away at its share of the home heating mix, especially in the wake of yet another global energy crisis.

As a result of the Second Oil Crisis in 1980, U.S. crude import prices rose to $113 per barrel in real terms, a 60 percent increase on the previous high in 1974. An average Northeast household in 1981 using fuel oil as a primary heating source spent nearly 40 percent more on annual heating expenses than one dependent on utility gas. From 1980 to 1990, the share of households using fuel oil as their main space heating source fell sharply from 49 to 38 percent, the single-largest regional change for any fuel over any decade in the past 50 years. Offering relatively lower annual costs and more stable market prices, utility gas rapidly outcompeted fuel oil to become the most common home heating source in the Northeast, serving as the main space heating fuel for nearly 50 percent of households in 2000, with its share growing to 55 percent by 2019 (Figure 3). 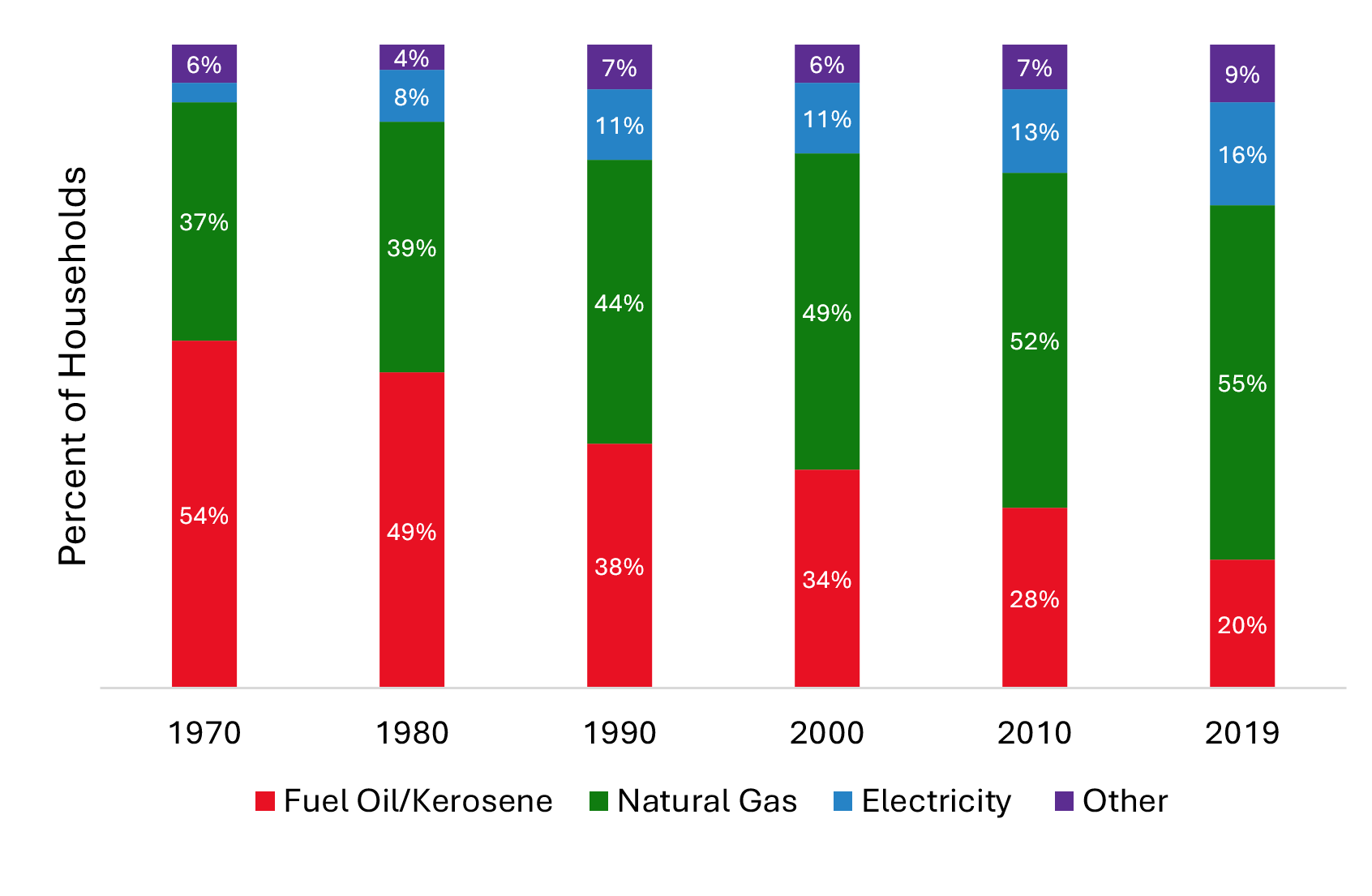 While the use of gas as a primary heating fuel has been trending downward on average in the United States for fifty years, the Northeast saw an 18-percentage point increase over the same time period (Figure 3). In fact, the share of Northeast households using gas as a primary heating fuel in 2019 mirrors the U.S. average in 1970. In addition, fuel oil use for space heating in the United States has fallen to record lows, representing just four percent of all households in 2019, while one fifth of households in the Northeast still rely on petroleum fuels. Most notably, the Northeast significantly lags the national average with regard to the share of households using electricity as a main heating source, the regional share growing just 13 percentage points over 50 years (Figure 4). 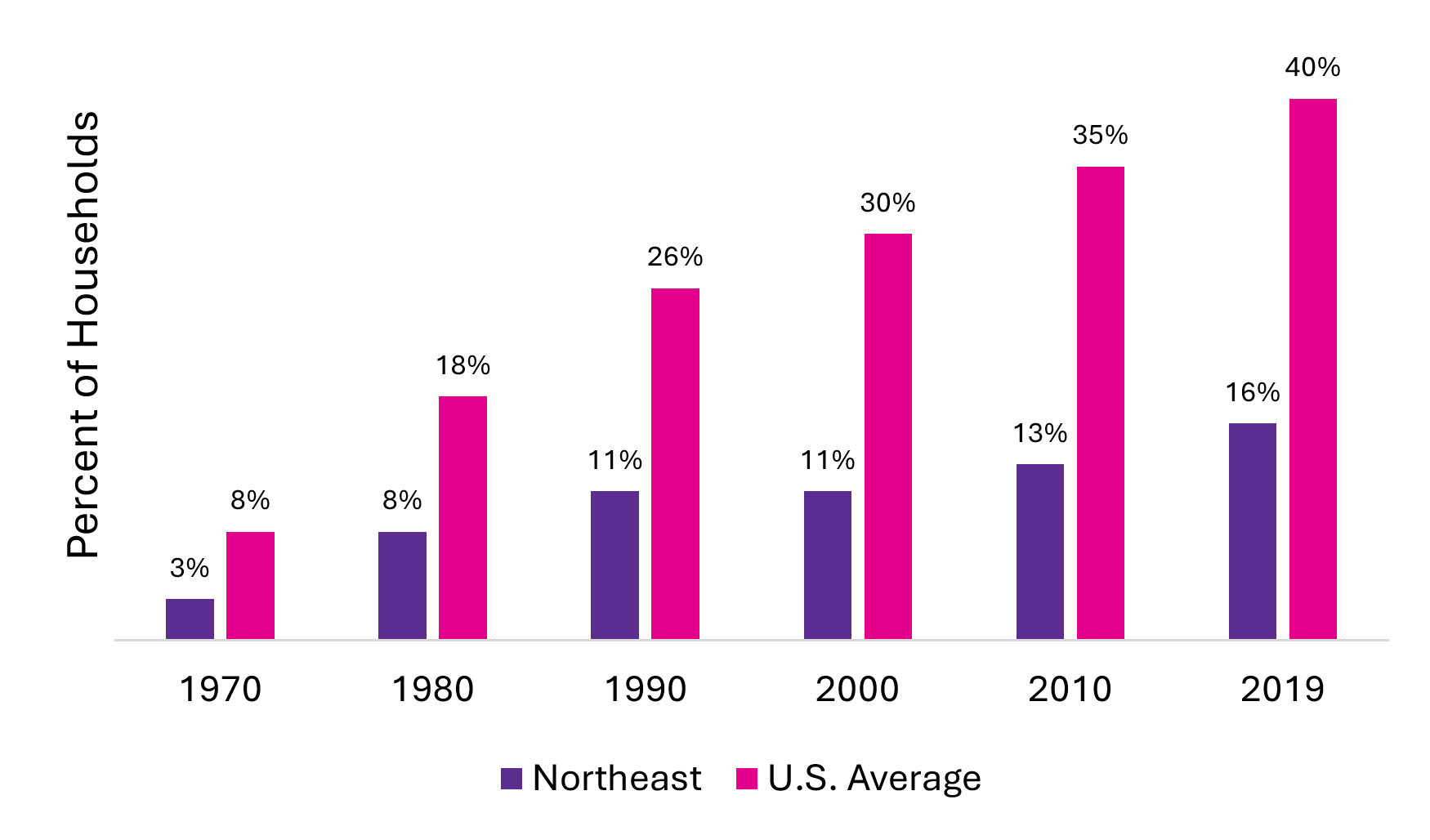 However, the emergence of new markets for high-efficiency, cold weather heat pump technologies and strong political will may flip the script in the Northeast as stakeholders across the region move to implement building electrification programs. As seen on Buildings Hub, the New York state government is expected to spend $230 million on building electrification through NYSERDA’s Clean Heat Market Development Plan, on top of the $254 million the state has already awarded or made available through other programs. New York utilities have also been approved to invest $454 million to support heat pump deployment in their service territories. Meanwhile, the Massachusetts state government has awarded $53 million for building sector decarbonization, most of which has been earmarked for electric heat pump incentives. Massachusetts utilities have also been approved to invest $3 billion in energy efficiency programs, which includes beneficial building electrification initiatives. Additionally, both New York City and Boston have adopted ambitious buildings decarbonization strategies, and their municipal leadership will set an example for both the Northeast and the nation to follow. While a historical laggard in buildings electrification, with effective public policy, the Northeast is poised to become one of its greatest champions.

Stay tuned for Part II of this Data Story to learn more about how the Northeast is scaling its ambition to become the nation’s leader in buildings electrification. 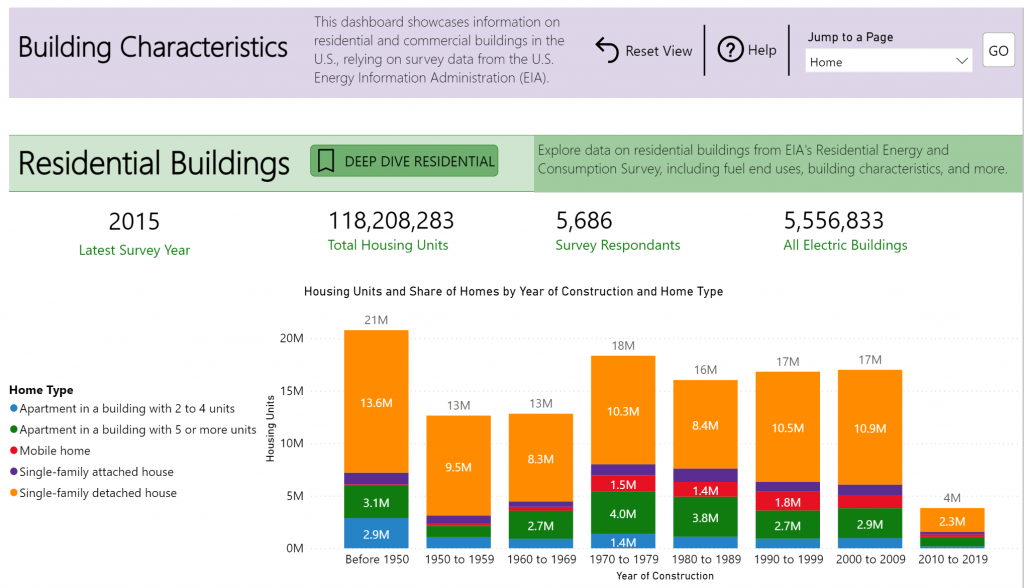 About the author: Zachary Strauss