The King in the North (Midwest) 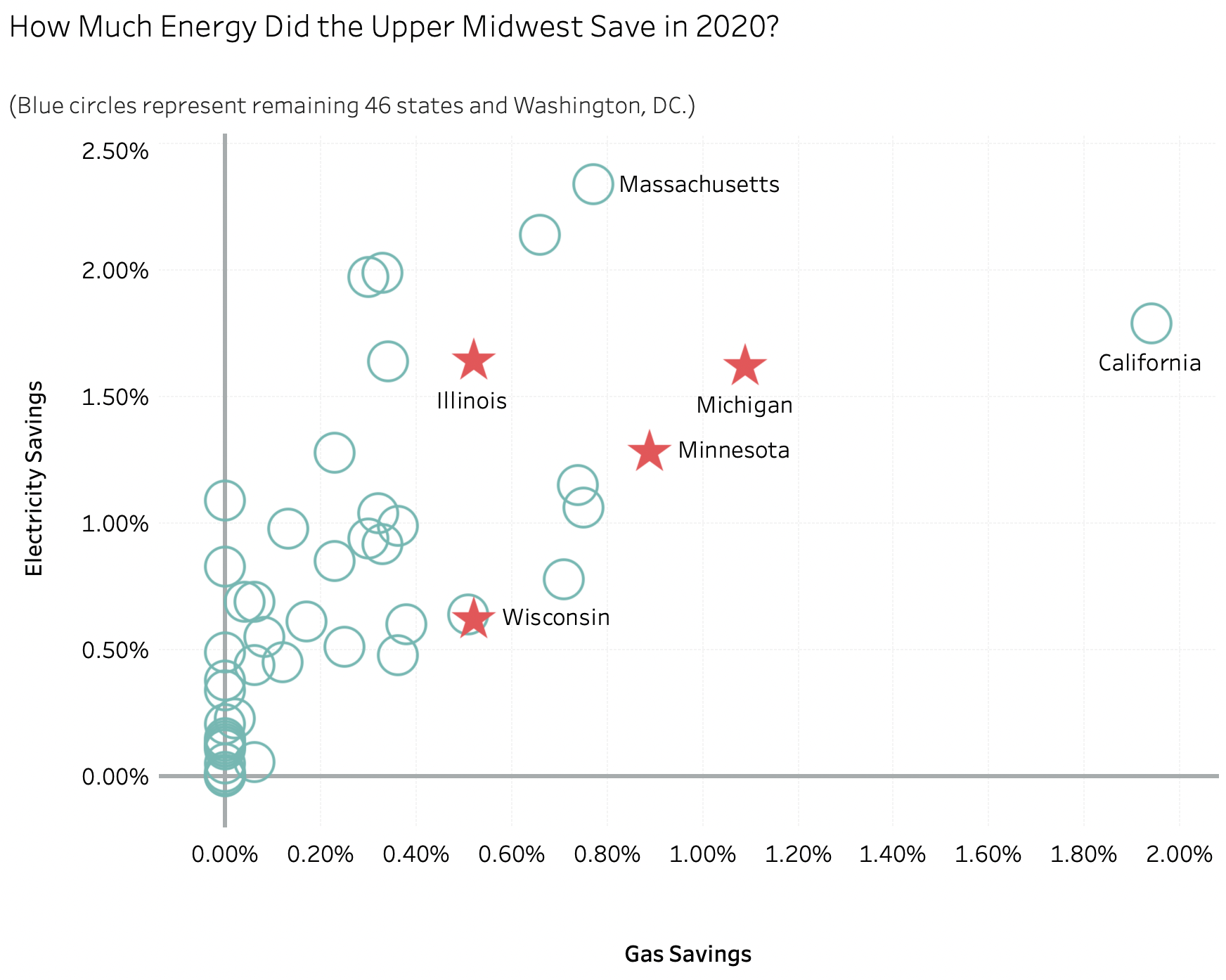 This week we’re zooming in on the upper Midwest – Michigan, Minnesota, Illinois, and Wisconsin – to evaluate which states are successfully promoting energy efficiency and electrification legislation and which might be lagging. When all is said and done, will there be one state that takes the crown? Check out the visual above for a sneak peek.

Let’s start with Illinois. Thanks to the recent enactment of the Climate and Equitable Jobs Act (CEJA), the state has charged ahead as a national leader in climate policy. The bill is a landmark piece of legislation for Illinois, setting a goal of 100 percent clean energy by 2050 with steppingstone goals along the way.

While CEJA focuses on energy generation, buildings were not forgotten. Firstly, the bill creates new funding mechanisms for home-energy upgrades which will help cover upfront costs. Additionally, it adopts the Energy Efficient Building Code as the minimum requirement for commercial buildings. The code aims to reduce emissions from commercial and residential buildings and to control costs for ratepayers, both of which point towards the adoption of clean HVAC technologies and equity considerations.

Thirteen years later, Governor Gretchen Whitmer issued another, far more ambitious directive: the creation of Michigan’s Healthy Climate Plan. The ambitions of the 2020 directive include a 28 percent reduction in state greenhouse gas emissions by 2025 (from 1990 levels) and economy-wide carbon neutrality by 2050.

While the plan is still in the works, one thing is clear: building decarbonization – specifically of Michigan’s existing stock – is an integral part of the equation. Here’s a direct quote from the draft plan: “When we rehabilitate an existing home or commercial space, we reduce GHG emissions and support decarbonization not only by lowering a building’s future energy needs but also by extending the useful life of all the materials used in its construction.”

Next, we turn to Minnesota. Not to be outdone by its neighboring states, Minnesota enacted the Energy Conservation and Optimization Act (ECO) this past May. The legislation increases Minnesota’s energy savings target from 1.5 to 2.5 percent (which is much larger than it sounds when considering the scale) and expands its scope to include beneficial electrification and load management. Additionally, ECO increases utility funding for low-income customers and re-allows utilities to fuel-switch when pragmatic (it was banned in 2005).

That leaves us with Wisconsin, the laggard of the bunch. In 2012, former Governor Kevin Walker issued Executive Order 63, unfortunately reducing the efficiency goal for state facilities from 30 to 10 percent above the state’s commercial building code. However, as the visualization above indicates, the state remains ahead of the pack on gas savings programs.

Going into the second quarter of 2022, we’re calling it a three-way tie between Illinois, Michigan, and Minnesota. All three states have made a great push towards electrification and increased energy efficiency, setting an example for the rest of the country to follow.

Who would you crown monarch of the Upper Midwest? Let us know!