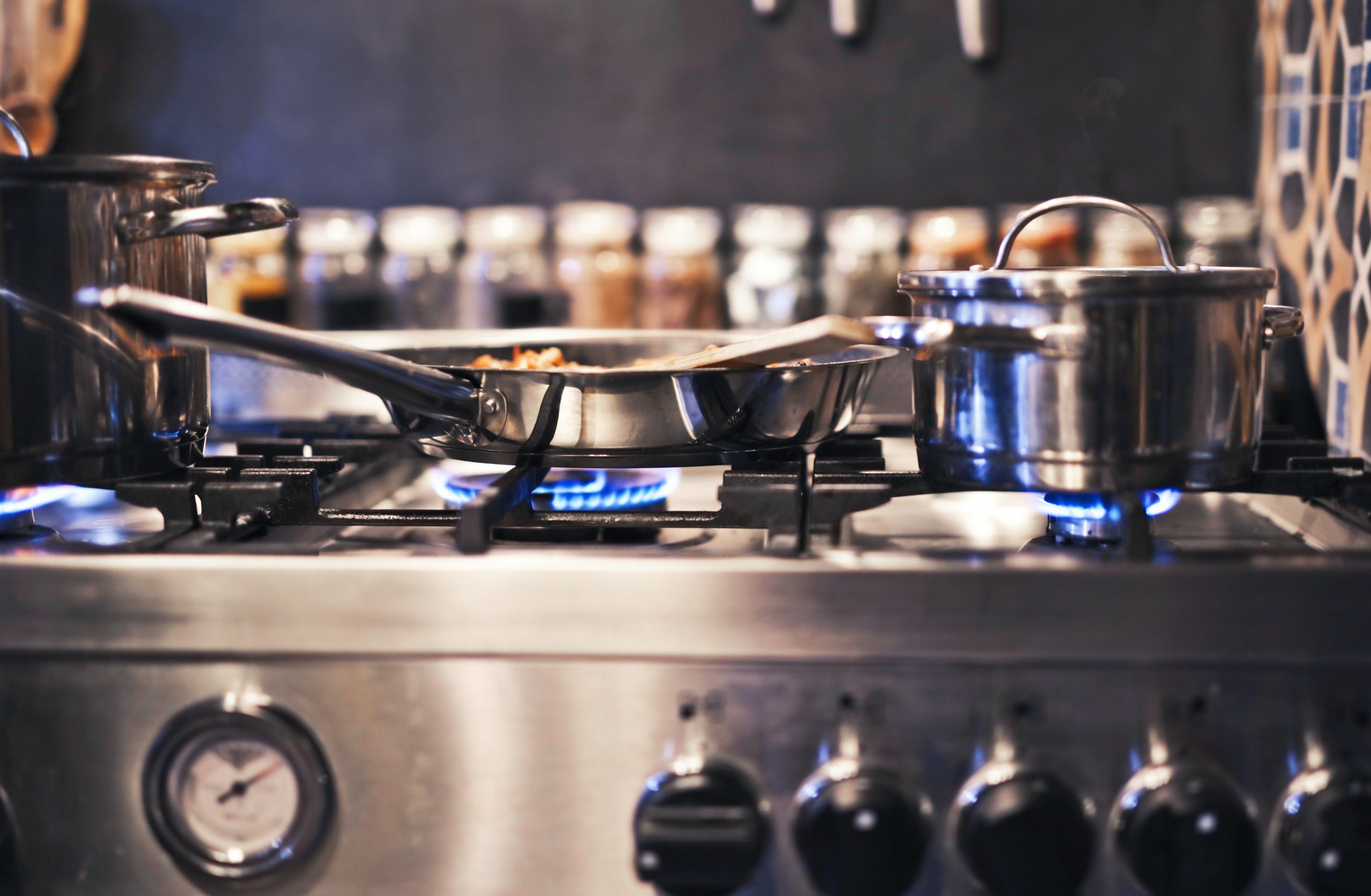 Driving around Richmond, California, it’s easy to spot the massive Chevron refinery as it spews harmful gases into the air. Luckily for those living proximate to this prodigious source of emissions, the refinery is being forced to clean up its act. The Bay Area Air Quality Management District (BAAQMD) is requiring Chevron and PBF Energy to reduce their local emissions through the installation of wet-gas scrubbers. The BAAQMD is one of 35 regulatory bodies in the state tasked with monitoring and controlling stationary pollution sources like this refinery. The district’s new rule could cut particulate matter emissions by 400 tons per year and reduce the health impacts the refineries have on those who live nearby.

Tighter restrictions on mega-refineries are a huge win in the fight against environmental-racism and for pollution control at-large. However, BAAQMD recognizes that large sources like Chevron are only half the battle. The district is working simultaneously to curb indoor emissions emanating from our own seemingly benign appliances.

While a smoke-billowing refinery is a widely-recognized source of pollution, public awareness falters when it comes to the harmful emissions of natural gas appliances inside most American buildings. According to the Sierra Club, gas-fired appliances are utilized in ninety percent of California households. It’s not until recent years that research organizations like the UCLA Department of Public Health have quantified the negative health effects posed by gas-powered appliances. Researchers at the university found that residential and commercial gas appliances in California combine to emit a comparable level of nitrogen dioxide (NO2) to that of the state’s entire light-duty fleet. An RMI report from last year found that the simple act of baking a cake can raise indoor NO2 levels to more than twice that of the EPA-recommended limit of 100 ppb for hourly exposure. Research from groups like UCLA and RMI continue to link indoor air pollution to serious health problems including decreased lung function, worsened asthma, or even respiratory infections and stroke.

The infographic below cites figures from the UCLA report to provide a sense of CA’s annual nitrous oxide emissions in tons from water heaters, space heaters, and ovens/stoves: 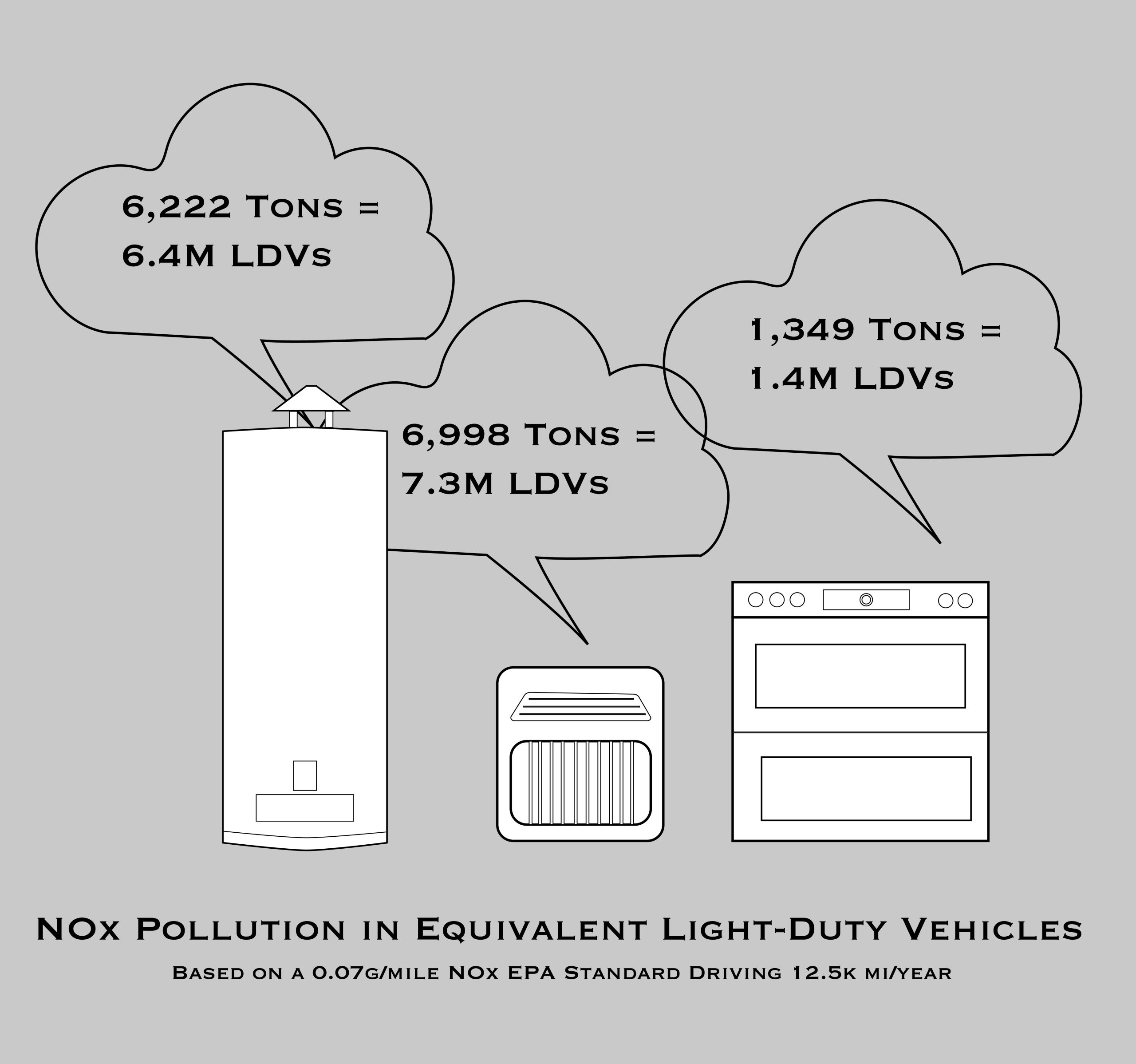 Armed with this sort of hard evidence, the BAAQMD recently proposed a zero NOx emissions requirement for natural gas water heaters and furnaces at the point-of-sale, which would effectively ban the sale of gas-powered furnaces and water heaters. The BAAQMD’s specific amendments are to rules 9-4 and 9-6, targeting furnaces and water heaters, respectively. The proposal sets a short-term limit of 14 ng/joule for natural gas fired furnaces providing a window for developers and construction companies to prepare for the change. When the long-term zero NOx requirement takes effect, Bay Area residents would be unable to purchase new natural gas space or water heaters, encouraging new builds and retrofits to go all electric. Because natural gas appliances typically have a useful life of about fifteen years, this ruling could lead to the rapid electrification of water heaters and furnaces in the Bay Area. With gas-powered appliances accounting for a tenth of total U.S. emissions, phasing them out would be a huge step in reducing GHG emissions as well as indoor pollution levels.

A public workshop will be hosted virtually on October 7th to go over the rule amendment and seek comments from Bay Area denizens and other concerned groups. The link to the workshop will be posted here along with other information around the regulations.

We will be monitoring reactions to BAAQMD’s proposal in the coming weeks, as we can expect massive industry pushback if the proposal is put into law. News is sparse thus far as the rule change remains in the proposal phase. After the city of Berkeley banned natural gas hook-ups in new construction in 2019, there was immediate pushback from natural gas companies and interest groups including a restaurant industry association who claimed chefs needed to retain the use of natural gas for cooking. State governments in Arizona, Texas, Tennessee, Oklahoma, Kansas, and Louisiana acted swiftly to prevent their municipalities from adopting similar restrictions on natural-gas applications.. Air Districts are unique to California, so the situation is likely to unfold in a different manner. Nevertheless, phasing out NOx emitting appliances will be vital not only for California’s emissions goals, but for the health of the American public at large.