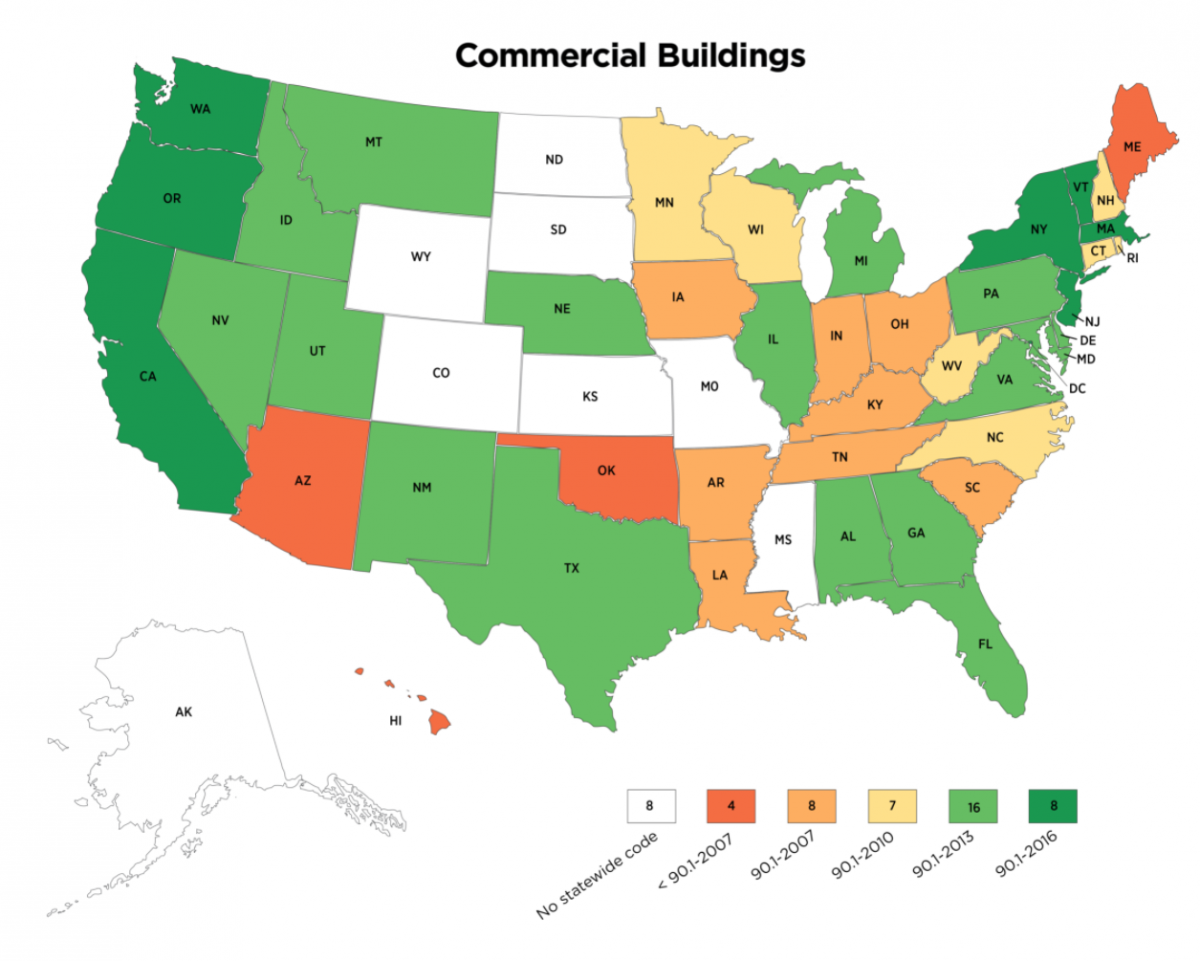 On July 28, 2021, the U.S. Department of Energy (DOE) quietly issued a determination regarding commercial building codes that could have a significant impact on the decarbonization of the U.S. buildings sector.

Every three years the American Society of Heating, Refrigerating and Air-Conditioning Engineers (ASHRAE), revises its building energy standard for commercial buildings, known as Standard 90.1. Each revision triggers a review period by the DOE culminating in a determination of the anticipated energy efficiency benefits of the revision. In its 2021 determination, pursuant to the 2019 revision, the DOE issued a mandate for each state to update its commercial energy code to meet or exceed the revised standard by July 28th, 2023.

This legal requirement is established in U.S. Code (42 U.S.C. 6833(b)(2)(B)(i)) dating back to the 1990s, but has long gone unenforced. If the DOE were to start strictly enforcing the requirement, it would mean a drastic overhaul of commercial energy codes in the U.S.. According to the DOE, currently only seven states’ codes meet or exceed the most recent standard (90.1-2016), and 26 states either have no statewide code or have not updated their code since 2010. The DOE estimates that the 2019 standard achieves source energy savings of 4.3 percent and reduces CO2 emissions by 4.2 percent compared to the 2016 standard. Energy savings compared to pre-2016 standards would be even greater.

While the requirement is codified in U.S. Statute, it remains to be seen if the DOE will be able to enforce it. The DOE is required to grant an extension if a sas made a good faith effort to comply with such requirements and that it has made significant progress in doing so.” As a result, it is unlikely we will see Standard 90.1-2019 across the board come July 2023, but the determination may at least kickstart action in states with long neglected commercial building codes. The DOE has many powerful tools at its disposal to advance building decarbonization, and commercial building standards could prove to be an important one.

Simultaneously, the race is on to drive residential building emissions towards zero. On the same day, the DOE also issued a determination approving the residential equivalent to Standard 90.1-2019, the 2021 International Energy Conservation Code (IECC). The DOE estimates that the 2021 IECC will achieve source energy savings of 8.8 percent and reduce CO2 emissions by 8.7 percent relative to the 2018 IECC. Unlike the commercial code, the DOE has no authority to force states to adopt the latest residential standard. Nonetheless, 10 states currently meet or exceed the most recent version (2018 IECC). It remains to be seen how many will choose to adopt the 2021 update now that the determination has been issued.

In addition to stricter efficiency requirements, the 2021 IECC empowers local jurisdictions with a new Zero Energy Residential Building Provision as an optional appendix. This new appendix can serve as a convenient way for jurisdictions to adopt a net zero code by providing standardized language that can be easily incorporated.

The two determinations were accompanied by a total redesign of the DOE’s Building Energy Codes Program Website, perhaps symbolizing a new era for the DOE’s involvement in state-level energy codes.